Oh, and in case you are wondering : MEA = Middle East & Africa

Last week and within five days, i was lucky to attend Microsoft MVP Summit 2013 – Part II . The date of this annual event was changed by the global MVP Team bringing the MVP summit to November instead of February. Microsoft experts from all over the world with expertise on a wide range products and technologies came to learn and meet each other.

The benefit of attending the MVP summit is the opportunity to interact with the Product Group members, my regional MVP leads as well as network with other MVPs from all around the world. I had some amazing discussions with SharePoint and Office 365 Teams on how customers in my region are currently using SharePoint and I delivered a good deal of feedback that I carried over form my region.

I’ll leave you with some pictures for now :

I’ve blogged about Curah yesterday and I really love it. If you are not familiar with the newly introduced initiative, please check yesterday’s post .

Today’s Curation in also in Arabic but the focus is on “Web Content Management in SharePoint Server 2013 & Office 365”. You can check it here.

Curah! has a very specific purpose: to help people searching in Google or Bing find annotated collections of great content that specifically target common user questions.
We’ve all been there before, typing in a search query and then hunting and clicking through pages of search results wondering where the good stuff is, what’s reputable, what’s appropriate, what’s current. A Curah! page takes the guesswork out of this process because it has been hand-selected and annotated by industry experts.

Since I really love the idea, I’ve decided to use it to create and share some content. My first Curation is in Arabic and is all about Managing the Lifecycle of SharePoint Solutions using Visual Studio 2012.

You can check it here ..

This is a quick note to let you know that the slide deck for the Web Content Management webinar that Marwan Tarek and myself have delivered back in September 2013 is now available on SlideShare.

In Microsoft SharePoint 2013, the platform’s search features have been significantly improved. SharePoint now offers a wide variety of exciting new features, as Microsoft has combined SharePoint search and FAST Search. Join our webinar to learn how these changes can help you maximize the benefits SharePoint has to offer.

Attendees will leave the webinar with a clear understanding of:
•    New search features available to end users
•    Enhancements in extensibility, customization, and administration
•    Recent changes made in SharePoint’s search architecture
•    Search in Office 365 SharePoint Online.

To take the first step towards successful Enterprise Search in SharePoint Server 2013 and Office 365,register for this webinar today!

If you have been regularly checking my blog recently, you have most probably noticed that I’ve been sharing some Arabic videos focusing on the new features in SharePoint Server 2013 & Office 365 related to Web Content Management that me and Marwan Tarek have recorded earlier. The sole purpose of this blog post is to roll-up all the videos in the series into one blog post for easier reference.

I’ll also be updating this article once we add new videos to the series.

Check them out here …

The latest version of Microsoft’s premier development solution, Visual Studio 2013, will be launched with an exclusive event in Dubai that will be broadcasted especially for developers in Middle East and Africa. You can attend the event virtually, no matter where you are!

Be one of the first people in the world to witness the Visual Studio 2013 public unveiling. Join us at S. Somasegar’s (Microsoft CVP, Developer Division) keynote session to learn more about the future of apps development. This is an opportunity you won’t want to miss!

Visual Studio 2013 provides powerful tools and services to help you create the next generation of apps. You can now develop, test, deploy, and support faster than ever before.

It’s a new day for developers with Visual Studio 2013. 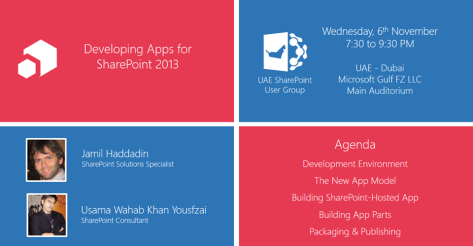 The session will introduce different ways in which apps could be developed and how those apps could be packaged and published for others to use.

UAE SharePoint User Group is a community group that has been established by a group of industry pioneers to help SharePoint users in the United Arab Emirates develop their skills and knowledge in this technology.